This study evaluates the performance of the students on rational prescribing. Three modules were developed and validated by an expert panel. These modules were applied in two medical colleges (intervention group) and other two medical colleges were taught in traditional approach (control group). Marks obtained in first and second assessment, in ‘student-centered learning’ approach were 28.34 ± 3.38 and 23.65 ± 4.18 (out of 35) respectively, in ‘problem-based learning’ approach were 38.15 ± 1.50 and 32.00 ± 2.37 (out of 40) respectively and in ‘integrated learning’ approach were 32.00 ± 1.79 and 28.84 ± 2.03 (out of 40) respectively. In all cases, marks obtained in the intervention arm is significantly (p<0.01) higher than the control. The marks obtained in first assessment was significantly (p<0.05) reduced in the second assessment in all groups. The present study revealed that student-centered, problem based, and integrated learning approaches are more effective than traditional method.

An ideal prescriber is the one who can define the patient’s problem, specify the therapeutic objective, verify the suitability of P-drug, write a prescription, and provide information, instructions and warning. In addition, they are expected to know the ways of gathering up-to-date information about medicines with competency to bridge the understanding of basic pharmacology with clinical practice (de Vries et al., 1994; Rahman et al., 2000).

The method of teaching and training is the determinant factor that influence the prescribing behavior of the physician. The perception that traditional methods of teaching and examination did not prepare medical students adequately for the task they perform exposed the need of rigorous review of the existing educational programs (Haque et al., 2005).

The pharmacology teaching in Bangladesh is mostly 'medicine-centered' at present (BMDC, 2012). Though a reverse approach is required, and this weakness of the present medical teaching is the principal reason of failure to produce competent medical graduates. The traditional teaching method is inadequate to achieve the expectation of a prescriber required to ensure their capability to prescribe safely and rationally (Johora and Rahman, 2019). The existing method is lacking the contents and techniques targeted towards developing the ability to measure risk-benefit, to select P-drug, to critically appraise promotion materials, to provide proper instructions to the patient and to adhere to appropriate guideline (Begum et al., 1999; Rahman, 1999; Das and Rahman, 2010; Ferdoush et al., 2016).

Among different methods, “SPICES model” reveals more relevant approaches which are suitable for undergraduate (MBBS) medical courses to make future prescriber competent (Harden et al., 1984). The “SPICES model” was first described at University of Dundee and the elaborated meaning of the word ‘SPICES’ is-

The spirit of this model is that the teaching method would be student-centered, problem-based and integrated one, which enable the future doctors to apply the pharmacological understanding into clinical practice.

This was a formative interventional research conducted between July 2018 to January 2019 at four medical colleges. The study was initiated after obtaining the ethical clearance from the Institutional Review Board (IRB) of Bangabandhu Sheikh Mujib Medical University (BSMMU). After getting the ethical clearance from the IRB, Memorandum of Understanding (MoU) were signed between the Department of Pharmacology, BSMMU and the Departments of Pharmacology & Therapeutics of the selected medical colleges.  The students were informed about the study design and its objectives. They were encouraged to participate voluntarily, and informed written consent were taken from them.

For the interventions, first three stems of ‘SPICES model’ (student centered, problem based, integrated approach) had been selected and three different teaching-learning modules were prepared based on those stems. Three different modules were developed for three approaches.

Endorsement: The formulated contents and structure of the modules were endorsed and validated by an expert panel constituted with two senior pharmacologists with more than 20 years of experience and one medial educationist with recognized postgraduate degree in medical education.

In the control groups, all topics included in the study were taught by the combination of traditional lectures, tutorials and practical classes. In this method, the whole session is actively driven by the teacher students are passive learners and.

The effects of the interventions were measured twice (first after one month and second after two months) by using an evaluation tool and compared with the control group.

This study revealed that ‘student-centered’, ‘problem-based’ and ‘integrated’ learning approaches were significantly better than the conventional method as reflected in student’s performance. Regarding the retention of knowledge at the time of second assessment (after two months), all three  approaches were found ineffective to maintain the memory up to that level.

Table I: Performance of the students participated in different approaches and the control (first and second assessment)

The curriculum is supposed to reflect the national health priorities, though the existing MBBS program is producing physicians who aren't trained for an environment they're expected to work. Moreover, the pharmacology teaching activities at undergraduate medical course is 'drug centered' now, though a reverse approach is required to maintain the clinical practice. This gap in the current medical program is probably the key reason of failure to produce competent community oriented medical graduates (Rahman et al., 1999).

On that backdrop, teaching-learning activities in medical education should be remodelled from top to bottom. Most importantly, one prescriber should have the urge and habit to acquire knowledge related to his profession (Bateman et al., 1999) and mastered the technique necessary to select the appropriate learning tools and media (Geffen, 2014). Couple of research were directed towards explaining the importance of keeping physicians updated about pharmacology (Gourevitch, 1999; Miller, 2003). The performance of the students participated in the ‘student-centered learning’ approach was significantly better about sources of unbiased information and awareness about price, as they received the opportunities to counterpoint their knowledge concerning potential drug information sources. However, the failure to maintain the performance indicate the inability to retain the acquired knowledge and skill, which perhaps require reinforcement. This finding may be explained by a previous study, which revealed that only a portion of the knowledge can be retained up to end course evaluation (Chan et al., 2012).

Some studies revealed the acceptance of intuitive learning by the undergraduate medical students (Rahman and Rahman, 1993; Michel et al., 2002; Haque et al., 2005). However, as the curriculum is designed in ‘teacher-centered’ approach that created obstacle to continue ‘student-centered’ technique requiring reinforcement. Perhaps, this could be a reason of significant decline in the performance of the second assessment.

Cognitive skill is usually maintained through repetition of practical work and the students require repeated practice to grasp any method (Prince and Felder, 2006). This learning approach was quite different from the rest of the curriculum. Repeated evaluation improves retention of information through greater use of visual, auditory and motor memory storage areas of the brain (Korwin and Jones, 1990). However, there was limited opportunity and occasions to practice in this research. This was known before that new learning technique would not be successful without repeated practice (Sharma et al., 2015).

The performance of the students significantly declined from first assessment to second assessment in the same manner as the conventional method. Regarding the retention of knowledge after two months, ‘student-centered’ approach found not to be effective, and this inability of this approach may be due to absence of reinforcement after four weeks.

Sustainability of PBL, depends on analysis, synthesis and repeated evaluation of material, which perhaps transfer the skills to long-term memory (Tyler, 1950). In order to improve the skill, ‘problem solving’ approach requires repeated practice and retrieval. Otherwise, that doesn’t sustain as a long-term memory (Schacter et al., 2003; Yadav et al., 2011). So, after some time, both control and intervention group become same due to absence of repeated exercise.

Integration could bring radical progress in medical education if that involves and includes all subjects. However, isolated integration in pharmacology twinkled light of hope about rational prescribing among future prescribers which resembles the revelation of other studies (Bateman et al., 1999; Geffen, 2014).

In order to develop the creative aspects of practice and to integrate the theoretical understanding with the practical skill, ‘problem-based learning’ is one of the most widely used methods. The basic idea is that learners will transfer these acquired problem-solving expertise to the real-life situation (Victor et al., 1974; Andrews and Jones, 1985).

Adoption of a variety of teaching-learning methods increases both teacher’s and student’s enthusiasm. Prudence necessitates to bring about student-centered, problem-based integration in pharmacology. In order to attain proper assimilation, the future curriculum should incorporate these concepts in a recommended systematic manner (Hunkins, 1985). This study exposes these issues in front of the suitable peers and generated interest to develop the new aspects of curriculum development which enable the future graduates to become a competent prescriber.

The present study revealed that ‘student-centered learning’, ‘problem-based learning’ and ‘integrated learning’ are more effective than traditional method in improving the performance of the future prescriber generally related to the prescribing of the selected areas.

Chan JCK, Wilford MM, Hughes KL. Retrieval can increase or decrease suggestibility depending on how memory is tested: The importance of source complexity. J Mem Lang. 2012; 67: 78-85. 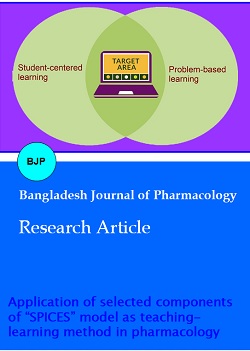