Isatin (1H-indole-2,3-dione) and its derivatives possessing an indole nucleus have arose great attention in recent years due to their wide variety of biological activities and pharmacological studies as insecticides (Bahmaria and Deliwala, 1968), fungicides (Chen and Rhodes, 1996), anticancer (Holla et al., 2000) and anti-inflammatory. Isatins are very important compounds due to their antifungal properties (Islam et al., 1998). Moreover, isatins are the synthetic precursors of some biologically important compounds such as quinoline 1, 2, 3-thiadiazoline (Ram et al., 1980). Besides that, the triazins [5, 6-b] indole-3-thione derivatives have attracted considerable attention in the field of medicine due to their antifungal, antimalarial and antiparasitic properties (Pal et al., 1991). Therefore, the research interest on isatins has expanded day by day.  Because of the continuing interest about isatins and its derivatives (Saha et al., 1992), the present study aims at the synthesis of some indophenines from isatins, thiophene, and thiazol. This work has been carried out from the synthetic point of view along with their biological (Islam et al., 1990) property especially cytotoxicity by brine shrimp lethality bioassay (Meyer et al., 1982; Solis et al., 1993).

Physical and spectral data of the compounds were recorded on a Fischer Johns electrothermal melting point apparatus by thin disc method, on a DR-8001 Shimadzu FT-IR spectrophotometer, on a WP-400 NMR spectrophotometer using DMSO-d6 as the solvent with tetramethylsilane as internal standard and on a Kratas MS-25 using DH-88 data system.

Isatin and substituted isatins 1a, 1b and 1c (Sandmeyer, 1919) were synthesized from the condensation of corresponding aniline with chloralhydrate and hydroxylaminehydrochloride followed by the cyclization with concentrated sulfuric acid. Again, some indophenines (Gregory et al., 1993) were synthesized from thiophene and isatin by the standard procedure. Indophenines 2a and 2b were obtained when isatin reacts with thiophene under refluxing condition in the molar ratio of 2:1 respectively in the presence of concentrated sulfuric acid. Indophenines 3a, 3b, 4a and 4b were prepared under identical conditions (as 2a and 2b) from 5-chloroisatin and 7-bromoisatin respectively. Again, indophenines 5a and 5b were prepared by the reaction between isatin and thiazol in the molar ratio of 2:1 in presence of triethylamine under intensive stirring at 80°C (Scheme 1). The cytotoxicity of the synthesized compounds was studied by brine shrimp lethality bioassay (Solis et al., 1993). Brine shrimps (Artemia Salina) were used as test animal for the investigation of cytotoxicity.

Hatching and maintenance of brine shrimp

The preferred condition for brine shrimp (temperature 28-30°C, salinity 30-35 ppt, pH 8-9, and strong aeration) was established by mixing sodium chloride salts in water. After obtaining the desired condition, about one teaspoon of brine shrimp eggs was added to the beaker. After 12 hours hatching aggregated brine shrimp nauplii were collected in another beaker and rinse with fresh water and applied for testing.

For the cytotoxicity study, dimethylsulphoxide (DMSO) was used as a solvent and the mortality of brine shrimp nauplii in this DMSO solution was almost zero. Different concentrations (150, 100 and 50 μg/mL) of each test samples were prepared with DMSO. Then 10-12 brine shrimp nauplii were transferred to each test tube using micropipette.

The numbers of survived nauplii in each test tube were counted. The percentage of mortality of brine shrimp was calculated for each sample that gives different mortality for different concentrations. An approximate linear correlation was observed when logarithm of concentration was plotted against percentage of mortality and the values of LC50 were calculated for each sample. The LC50 represents the concentration of a compound, which will kill, or inactive 50 percent of the test animal. LC50 is inversely proportional to the toxicity of a compound, i.e. the lower the LC50 the higher the toxicity.

Reaction I: After recrystallization, the products 1a, 1b and 1c were obtained as brick-red solids with the yield of 90% and m. p. ranging from 188°-195°C. The structures of the compounds are consistent with the physical constants and spectral data. The IR spectra of the compounds 1a-c show a sharp band at 1772 cm-1 corresponding to the nC=O keto group and another sharp band at 1740 cm-1 indicates the nC=O lactam. Again, the 1H-NMR signal for >NH is also observed in the respective region as a singlet and a signal for aromatic ring as multiplet. The indophenines (2a-b, 3a-b, 4a-b and 5a-b) have been synthesized from isatins, thiophene and thiazol in moderate yields. The products have been characterized with the help of spectral analysis from Japan (Tokushima University) and German (Ruhr University).

The SAR study of the synthesized compounds showed different cytotoxicity against brine shrimp. The chemical structure of a compound is very important as the relatively minor modification in the compound may results in major change in biological properties. The isatin 1a is almost inactive but the introduction of a chlorine atom in 5-position of the benzene ring (1b) enhanced the cytotoxicity. Again, insertion of a bromine atom in 7-position of the benzene ring (1c) further enhanced the cytotoxicity as 1c>1b>1a, although the position of bromine and chlorine atoms are not identical. Indophenines 2a and 2b show higher cytotoxicity than that of isatins 1a, 1b and 1c due to the presence of thiophene moieties. Again, the indophenine 2a with two thiophene moieties shows still higher cytotoxicity than that of 2b with one thiophene moiety. On the other hand, the indophenines 4a and 4b show still greater cytotoxicity against brine shrimp nauplii than that of 3a and 3b, due to the presence of bromine atom in the indophenines. Also the indophenines 5a and 5b show very high cytotoxicity property against brine shrimp nauplii. The cytotoxicity enhancement is due to the presence of hetero atom N and S in the thiazol ring.  Thus the compounds 1c, 4a, 4b, 5a and 5b are very active and the compounds 2a, 2b, 3a and 3b are moderately active.

The present study shows that the cytotoxicity increases by the introduction of Br atom in the benzene ring than that of Cl atom and the greater is the numbers of heterocycles adjacent to the isatin ring, higher is the cytotoxicity. Especially the bulky molecules that contain two thiophene moieties have better cytotoxicity, which means, it hinders the replication of DNA molecule.

We express our sincere thanks to Dr. Khurshida Khayer of Jahangirnagar University, Bangladesh for supplying 1H-NMR, 13C-NMR spectra of the compounds from Germany. We express our gratitude to Dr. Md. Mamun Hossain, Jahangirnagar University, Bangladesh for recording some of the IR and UV spectra of synthesized compounds. We are also grateful to Dr. Md. Rafiqul Islam for recording some 1H-NMR and mass spectra of the synthesized compounds from Japan. 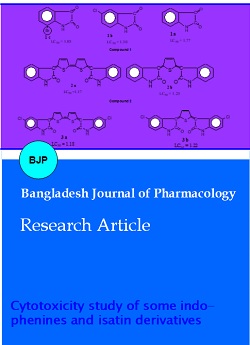